The OTT app space is a fractured, evolving frontier. To stake your claim, you need a team of OTT cross platform development experts who know the lay of the land.

What does cross platform development mean in the over-the-top (OTT) app space?

Unlike in the traditional app world where Apple iOS and Android dominate over 99% of mobile OS market share, the OTT arena is much more fractured.

Audiences don’t just favor one or two platforms or devices for everything; they use multiple platforms at any given time, sometimes simultaneously. They may start one video at home from a Samsung connected TV (CTV), and pick up at the park on their iPad.

To take advantage of this “be everywhere all the time” experience, content distributors must build OTT apps that work well everywhere their audiences live, or in whatever way they choose to enjoy their content. Cross platform development is the process of creating apps that work seamlessly on their different devices and platforms.

But it can be easier said than done.

And that’s where the experts come in.

what does cross platform development for ott apps require?

Publishers need to consider building out apps for the best streaming devices, including:

Stats reveal that almost 40% of all OTT app users worldwide stream on a Roku device. And more than 31 million devices have been sold. So developing a custom Roku app should be every content distributor’s first priority.

Amazon has sold almost 30 million streaming devices in the US, and Fire TV garners 40 million active monthly users. With their devices and smart TVs, developing on Amazon Fire TV is the next logical step after your Roku build.

Apple TV first debuted in 2007, and now estimates show there are 53 million active Apple TVs worldwide. Over 26 million Apple TVs live in US homes (roughly 21% of US households). With the release of Apple TV+, Apple’s foray into the streaming video world, these devices may see a huge uptick in sales.

Google has sold over 55 million Chromecasts since launching in 2013. Users can stream video from their Cast-enabled apps on their phones, laptops, or tablets. And now you can stream in up to 4K Ultra HD and HDR with the Chromecast Ultra.

Developing an app for Google Cast means you’ll extend your Android, iOS, or Chrome app to direct its streaming video and audio to a Cast-able TV or sound system. Your app becomes the remote control to play, pause, seek, rewind, stop, and otherwise control the media.

product range: Chromecast, Chromecast Ultra 4K
coding language: To build a Cast app, you need a sender application written for each Android, iOS, and Chrome platform. You also need a receiver application that will handle communication between the sender app and the receiver device.

Microsoft’s Xbox One is an excellent option for app developers looking to capitalize on the growing trend towards game streaming. It also presents a profitable opportunity for media and entertainment brands in the family-friendly market.

Xbox Live had 65 million active monthly users in the last quarter of 2019, and sold over 46 million Xbox One devices worldwide as of January 2020.

Smart TVs combine the big screen of a standard TV with the ability to connect to the internet and download your favorite apps. An estimated 57% of US households own at least one smart tv and 70% of new TVs sold fall in this category.

As you can see, developing apps for each of these major operating systems requires the highest level of expertise and understanding because they’re all different.

Further, within those operating systems, you also must consider the sheer number of different devices, versions, and generations running them. 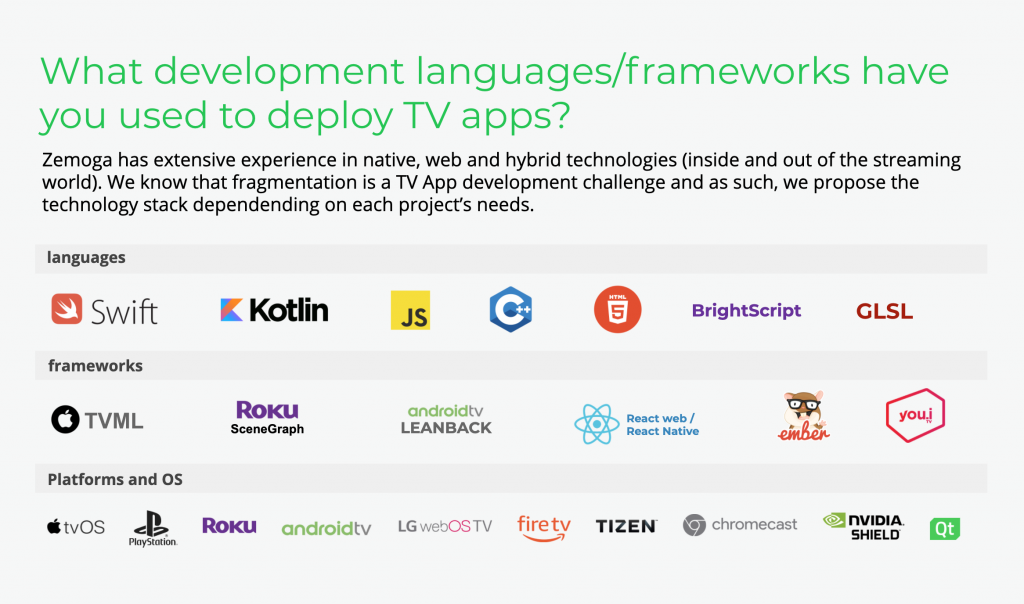 dealing with device fragmentation in ott

Device fragmentation refers to the wide variety of device generations, models, and versions in use at any given time.

There’s a 20% jump each year in new devices to hit the market, resulting in the addition of more than 5,600 device profiles worldwide.

Each of these devices comes with their own history of previous generations, models, and software versions.

Take Amazon Fire TV. These have been around since 2014, running from Fire OS 5 through Fire OS 7. And there are multiple generations of each device: 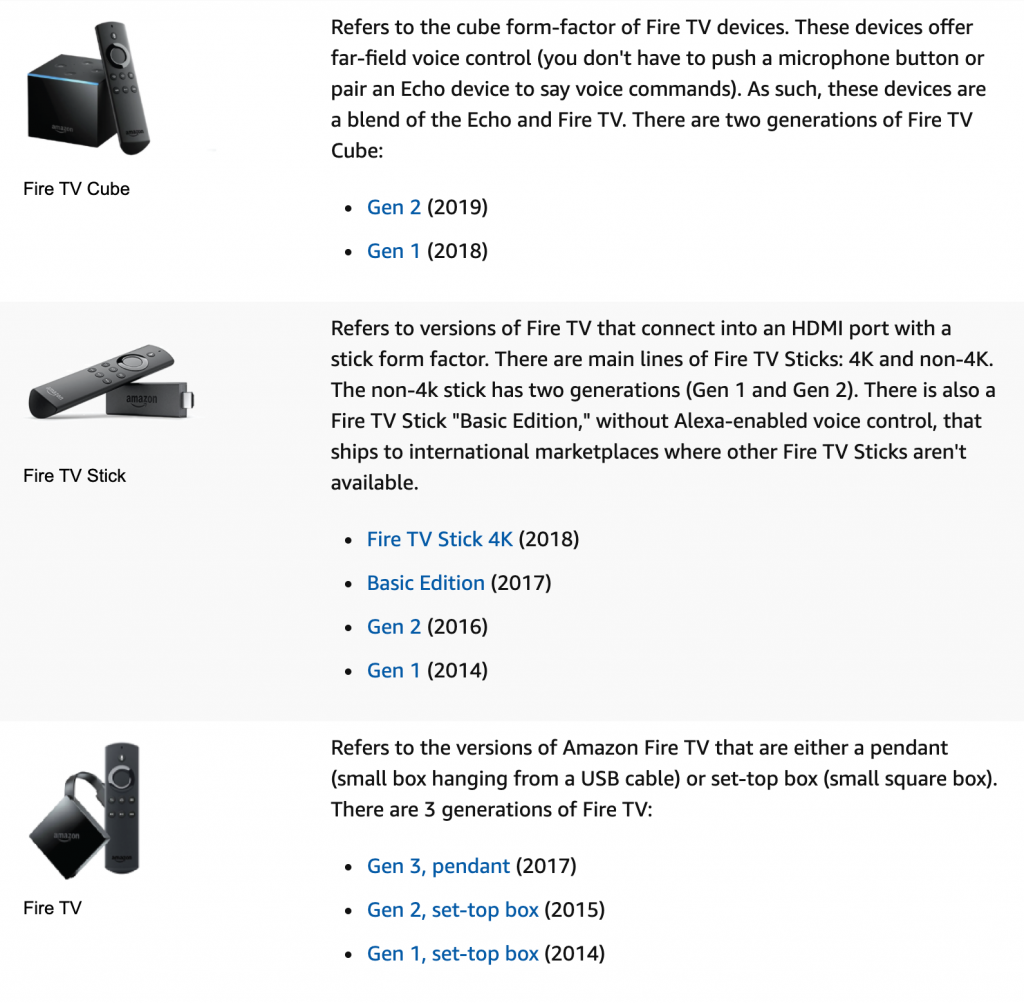 Because you don’t know which devices your viewer may use, developers can’t just build for one; they must build for as many as they can. This takes mitigating the issue of device fragmentation to aim for a consistent experience across more than 95% of devices.

However, guaranteeing your app works well across the entire gamut of legacy devices and newer models calls for extra effort, time, and resources. And not many people have such a diverse range of high-level programming expertise, knowledge, or experience to get this right.

Native functionality refers to the features already inherent in a platform or device. These are the features users have come to know and expect to use.

For example, there are two remotes for the Apple TV: one with Siri-enabled voice commands and another with on-screen search capabilities. When HBO Max was released on Apple TV, the app didn’t include Siri control. Apple TV users expected this feature to be present, and when it was not, it needed to be addressed by HBO Max.

If your app doesn’t work with native features users will be disappointed and their overall experience will suffer.

What’s worse is not taking advantage of the native functions that go into an intuitive and money-generating OTT app. Apple created this particular feature to encourage the social experience of several people sitting on the couch and interacting with your app and each other. Not designing for this feature misses the boat entirely.

So OTT cross platform design must start with a clear understanding of how the technology is’s supposed to work. Then developers can apply this knowledge to create a killer user experience that checks all those boxes and then some.

Native app development means creating an app for a specific platform, device, or operating system. The codebase is built entirely for that one app, and cannot be shared or reused for a different one. So when you want to expand your reach, you’ll need to recreate the process again.

React Native app development means developers only have to create one framework of code that will work across all (or most) devices/platforms. This one-code-fits-all approach means you don’t have to go through the app development process for each specific platform or device.

React Native seems like a solid solution to OTT cross platform development for its speed, reliability, and flexibility. But what you trade off to obtain those perks may not be worth it.

Developing one codebase across different platforms may result in less satisfied users.

So, for some brands, it’s better to develop your app multiple times using the respective native technologies for each platform. These take into account the specific quirks and user functionality that make each platform special.

While we agree that investing in native is the best choice for your brand’s overall experience, it’s also going to take longer and require more resources. That’s why our proven hybrid model gives you the best of both worlds.

We’ve built channels and experiences across multiple platforms and endpoints for leading global content publishers using a combination of both common and platform-specific native functionality layers.

This model ensures a speedier build with fewer performance issues. Our deep knowledge of streaming, mobile, and living room experience factors, as well as how to drive discovery, awareness, trial, and retention of audience, will add value to your digital experience delivery.

Many considerations go into OTT cross platform app development, and high-level expertise is necessary to help bridge the gap between your goals and the actual design.

If you’re ready to deploy, choose a better way to build, design, and launch with our team of mythical OTT app savants. We’ve got the skills you’re looking for. And we’re not shy about sharing.

Now let’s get down to business!